Hi. Where does the time go?

I spent like 6 weeks having serious anxiety and dread about an oral surgery I had to get to figure out and remove a mystery growth up behind my back tooth. It was an aggressive type cyst. I do not appreciate you, cyst, or your aggressiveness.

In February I flew on airplanes and cried half the time. It was likely partly due to being pre-menstrual or very nearly menstrual. I drank one of those little bottles of wine at 9 in the morning and then I listened to the man next to me describe every detail of his discovered genealogy. He was in the Air Force. He said I was safe. I did not feel safe, but safer for talking to someone. A little more relaxed with some wine in me. I heard all about his ancestors in Germany. He asked me nothing of my own life. Fine, it was fine. Keep talking until we land. Nice to meet you.

I’m worried I will never be able to fly again. And I’d really like to go to Japan. And Hawaii. And Norway. And I would like to visit Austin again. It’s been 10 years. But I don’t want to drive to Austin because I don’t want to be in the hot car for 15 hours and I don’t want to travel through Oklahoma again and see gun signs and I hate public restrooms. But I also do not want to fly.

Possible titles for my memoir so far

I Thought It Was Going to Be Easier

It Seemed Like a Good Idea at the Time

If I Had To Do It Over, I Would Have Kissed That Boy in 6th Grade

Regret is a Two Week Europe Trip at 21

Never Did Figure Out How To Put On Eyeliner

Some really great YA books I have recently read

I love existential stuff and I really like existential stuff in my book reading. These are a few books I have read and enjoyed and been moved by. Books that burrowed into my psyche. Books that made me want to work harder at my own writing. Books about meaning and existence. How do we make the best of living in this crazy life?

We Are Okay by Nina LaCour is quiet and sad and lovely. It dives into grief, loss, and identity. My first Nina LaCour book and I’m definitely interested to read more.

The Strange Fascinations of Noah Hypnotik by David Arnold. I’m a big, big fan of Arnold. I love his other two books, BUT I FREAKING WORSHIP THIS ONE. It’s so good. Has all the ingredients I love: existential angst, humor, quirk, juicy characters, a touch of magical realism (sorta), and some music worship. It’s a fun read, but it takes you on a satisfying emotional journey, as well. I need to talk about this book with people.

Every Exquisite Thing by Matthew Quick is fantastic. Lots of identity exploration, meaning exploration, and incredible characters. I found this on a used bookstore shelf and I’m so glad that I did.

sometimes you feel sorry for yourself

These are hard times for a lot of people. Not you, so much. You are doing okay in your cozy house in your progressive community. But it hurts to see the pain around the world and it hurts to see the divisiveness and it hurts to know who our official leader is and the things he does and says and is willing to do. It hurts that people cheer and clap for him. And you worry. You worry that your daughter is going to be a grown up in this new world where rights are being taken away and no one is doing anything about climate change or gun violence. Where this leader says awful things about women and no one stops him. 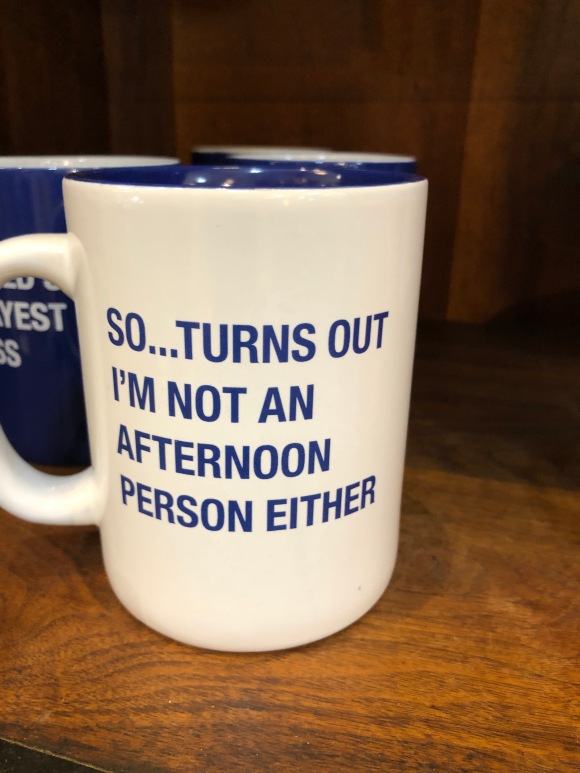 And then you see this old man and he’s playing on one of those pianos they put out on the sidewalks in the summertime. He’s got some sheet music in front of him and you can see “Bach” at the top in big letters. It’s a nice day. It’s breezy. There are things that are good.

I hope in my time

They figure out what dark matter is. And clean up that giant floating island of garbage in the ocean. And have fast trains up and running all over the U.S. And I hope I get to live in Oregon someday and spend more time in forests and near the ocean.

I WATCHED THE OSCARS

And now I’m up too late. I am happy for the winners and sad for those that didn’t take away a statue. I love Laurie Metcalf. My favorite dress was on Greta Gerwig. Frances McDormand rules! Can she me my professor in the how to live life like a badass class I need to take? Just seeing Lin-Manuel Miranda always makes me feel happy. Really, I should go to sleep now. Good night. Thank you.

sometimes this blog taunts me

With its lack of posts.

I’m taking this idea from Alex Beauchamp who recently posted (reposted, I suppose) her list comprised of 101 things from karaoke to ride on the roof of a train in Ecuador on her website Hygge House. 101 things is a lot of things. (P.S. Alex takes the most beautiful pictures)(Side note: this is what I’m doing instead of writing. this is procrastinating.)

In no particular order (just how it pops into my mind), Ladies and Gentlemen….

I have questions about Twin Peaks: The Return

I love it. I really loved it. Yes, the ending was uncomfortable. Yes, it was inconclusive. Yes, it was maddening. And maybe also brilliant. Totally David Lynch. Anyway, here are my lingering questions. It helped me to write this list. It was therapeutic. Humor me.

What happened to Audrey? Where is she?

What was the box in New York? Was it Evil Coop’s? For what purpose?

Why did Evil Coop have to go through portal to get to Sheriff’s office? Couldn’t he have just driven there? Walked there?

Did he get to the coordinates he was looking for? And that was to Sherrif’s office?

What did Chad have to do with anything? Other than being a jerk. Chad was the worst.

What’s going on with Beverly’s husband?

What is the sound she hears at the Great Northern?

Who are all those people having conversation at the Road House?

How did Major Briggs end up headless? What happened in that hotel room?

Where did Cooper and Diane go? Where did they intend to go? What was that sex scene all about? Why did Diane see herself standing outside? Why did Cooper end up in a different hotel with a note to Richard from Linda? Who are Linda and Richard?

Is this an alternate reality?

What is going on with Sarah Palmer and her scary opening head? What makes the noises in the other room?

Why was that girl crawling on the floor and screaming?

How does the Roadhouse seem to schedule such awesome acts?

Again, what is up with the coordinates? What is everyone looking for?

Who or what exactly is Judy?

How has he Cooper previously met Judy?

What happened to the girl who had the frog bug crawl into her mouth? Who were all those people in that town and why did the grimy Convienence Store dudes want to murder them?

What did all the numbers mean?

What was up with Balthazar Getty and his magic tricks?

Why did Steven kill himself?

What kind of name is Janey-E?

Please feel free to help me/contribute to the convo. Fun!

I want to go to Brooklyn and eat

I want to go to Brooklyn with my husband and stay in a boutique hotel and wander the streets and eat many things and visits shops and look at the people and see art and music but mostly eat. I don’t even care if I see Manhattan.

I want to go to Norway and pretend for a moment that it isn’t 2017. It is ancient times. It is another world. I want to see the fjords and feel the earth’s magnificence. I want to lie by rushing streams and feel 16 and lovely and full of future.

I want to ride a train across Canada. I will admire the beauty of the landscape and have tea with toast and marmalade.

I want to kayak on Lake Tahoe and read and nap in a hammock by the water.